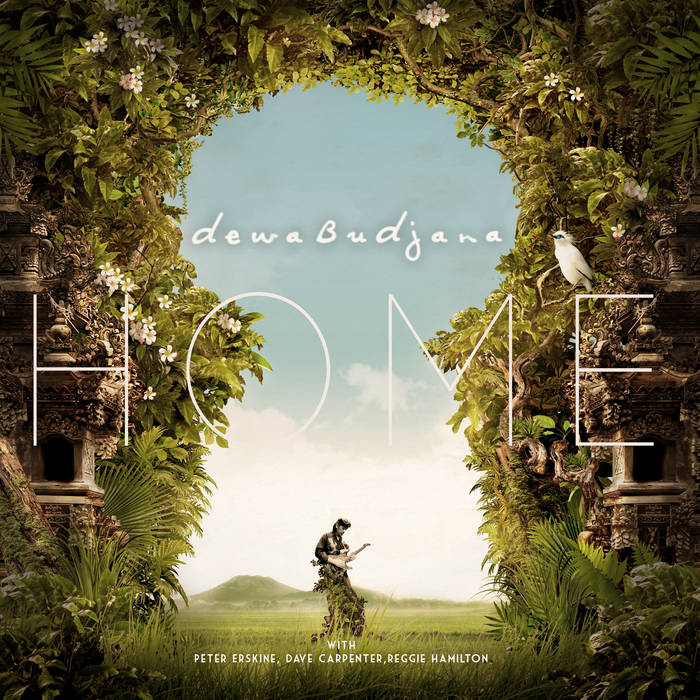 Sven B. Schreiber (sbs) Since "Temple Island" is my favorite track on the "Postcard From Bali" sampler, it was clear that I would purchase "Home" sooner or later. In this case, it actually happened sooner, because it's really a stunning folk-fusion album with wonderful melodies. Couldn't wait anymore... Favorite track: Lost Paradise.

This is the re-issue of 2005 album of Dewa Budjana, "Home". Now released internationally only in digital format (on MoonJune Records) as well on 180 grams LP vinyl (Audio Anatomy/MoonJune), and with the brand new artwork (courtesy of the Indonesian artist Aga Dilaga). Digital release has 3 live bonus tracks, while the LP vinyl release includes 8 original tunes released on the 2005 release.

"Balinese guitarist Dewa Budjana admittedly did not ascend through the ranks of music education, but his early interest in pop segued into a fascination with jazz. And other than his continuing involvement with the popular Indonesian band Gigi, Budjana was prompted by ex-Weather Report and all-world drummer Peter Erskine to record this album. In addition, the guitarist dedicates this thoroughly appealing musical statement to the victims of the horrific Tsumani. Budjana merges his ethno-musical influences and roots into a wondrous set of Indo, jazz-fusion. With Erskine, bassist Dave Carpenter and others lending their wares, the music is largely about attainable concepts, fused together into a harmonically rich sequence of events. Consisting of sitar-guitar like shadings, firm backbeats and a contemporary jazz outlook, many of these pieces also feature sinuous developments and multilayered textural components. And when Budjana stretches out, he incorporates lyrically-rich progressions and speedy single note lines with variances in the sound of his e-guitar, which in effect, creates a colorific scenario. Teeming with solid compositions, designed upon climactic unison choruses with keyboardists, vocalists and percussionists using indigenous instruments, he generates mood-evoking sentiment here. On "Lost Paradise," Budjana’s acoustic guitar phrasings are spiced with harmonics and electric guitar overlays, where folkish interludes with Dian Pramana’s wordless vocals cast notions of a far-away, but inviting landscape. Then on "Dancing Tears," the band conjures up remembrances of 70s-style progressive rock via snaky time signatures and thrusting rhythms. In sum, Budjana’s stylistic artisanship serves as a welcome breath of fresh air. It’s not all about killer riffing as the guitarist’s idiosyncratic compositional style bridges a potpourri of styles and genres that transmit a deeply personalized and altogether, absorbing program."
- GLENNA ASTARITA, JazzReview.com

'Home' is where the heart is, some say.
For others, sadly, it is where the hurt is.
But be it the source of joy or pain,
each of us longs for a familiar place;
a place to go back to: a sanctuary.

Many have lost that very place,
like our brothers and sisters -the victims of tsunami.
Others’ homes continue to be hit by savage attacks,
including the recent tragedy in my homeland.

This record aims at uttering my deepest sorrow and compassion.
I hope time can heal our wounds, and we can finally find our way 'Home'.
'Home' in harmony with nature, and
'Home' in a world without hatred and bigotry.