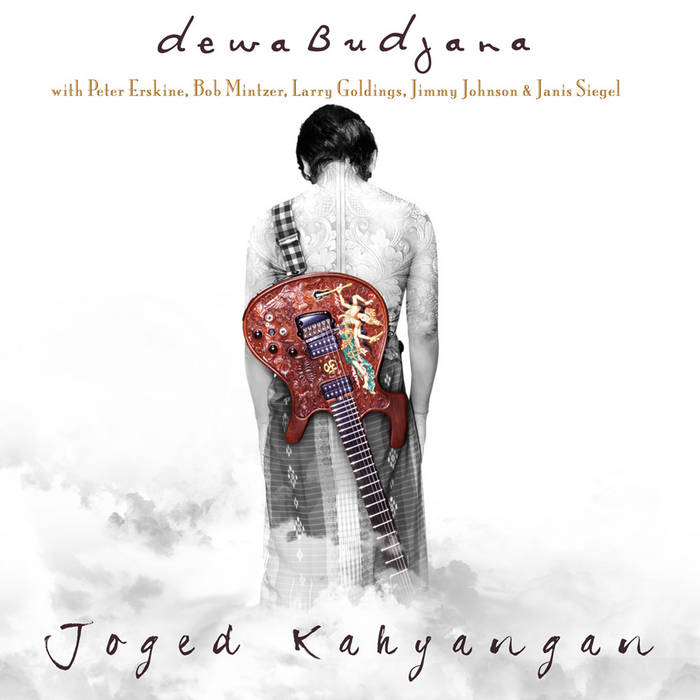 Sven B. Schreiber (sbs) Dewa Budjana's Indonesian folk roots are not as obvious on this album as on its predecessors. Large and by, it's heavily oriented towards the typical "Western" fusion sound, which is a bit of a pity. Notwithstanding that, I admit that I like this album quite a bit because of its flawless songwriting, full of sublime melodies that really move me to tears... tears of joy, of course... Favorite track: Joged Kahyangan.

Dewa Budjana may not be a household name outside of his native country, Indonesia, but with MoonJune Records picking up this exciting guitarist and composer, all that could be about to change. He's already garnered some serious attention with his first recording for the label, Dawai in Paradise, released earlier this year, but at home, he's nothing short of a pop star. Lead guitarist and songwriter for the multi-platinum, million-selling Indonesian pop/rock group Gigi, the fifty year-old Budjana has already expe- rienced the buzz of playing in front of stadium audiences of 60,000 at home, despite playing to club-size crowds on the rare occa- sion that Gigi has made the lengthy trek to North American shores. But while Budjana continues to make big selling pop music with Gigi - at last count over 20 recordings since 1994 - his own recordings have reflected a more decidedly jazz-centric disposi- tion, albeit oftentimes heavily influence by both the traditional music of Indonesia and the spirituality of his Hindu faith.
Joged Kahyangan, the guitarist's second international release, after critically acclaimed Dawai In Paradise, both on MoonJune Records, which features American jazz and fusion legends Larry Goldings (acoustic piano and Hammond organ), Bob Mintzer (soprano & tenor saxophone, bass clarinet), Jimmy Johnson (bass guitar), Peter Erskine (drums) and on one tune Janis Siegel (vocals) – may largely dispense with overt indications of Budjana's native roots, but there's another even more important differ- entiator: the album was recorded in a single day, with no prior rehearsals. Most of the songs were second or third takes, with the first take acting as the only rehearsal for the group, making Joged Kahyangan as close to a live album as Budjana has made to date, though he has released two live DVDs in Indonesia. What's most surprising is how well his musical partners navigate Budjana's charts; not unlike American guitarist Pat Metheny, despite an overall ambience that feels easy and accessible, Budjana's music reveals far greater depth under the hood. With more MoonJune recordings on the horizon and the possibility of taking his American friends on the road for the first time in 2014, Dewa Budjana's name is rightfully on the ascendance and his career on an equally upward trajectory.