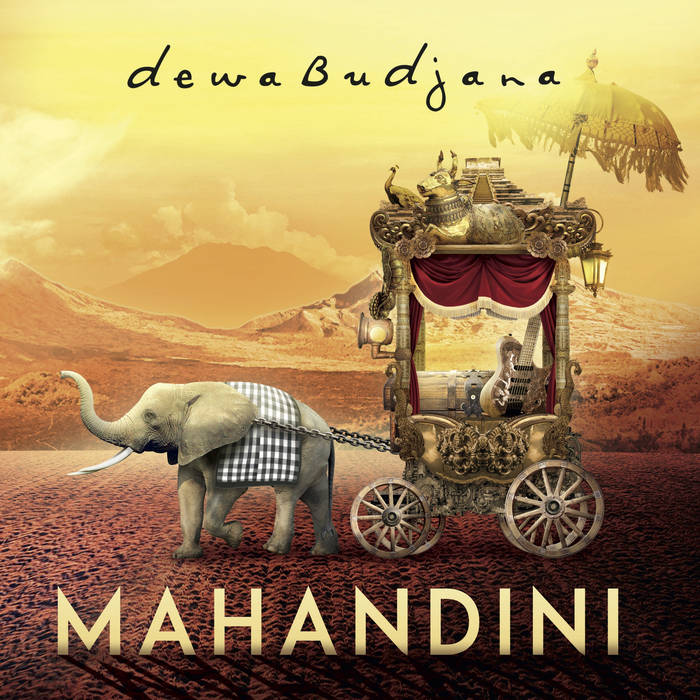 Sven B. Schreiber (sbs) This is the sixth Dewa Budjana album in my collection, and for $5 at a 50% promotion, it's a real steal! Well, I have to admit that I'm a big fan of his early albums, released when he wasn't a star yet, worked with local musicians, and included a fascinating far-east folk feeling in his compositions. The latter is almost completely missing on this most recent album of his, starring part of the who is who of fusion. It's well-done middle-of-the-road fusion most of the time, but alas, nothing exceptional. Even Mohini Dey's technically perfect bass wizardry is not really touching. The highlights are, in fact, both of the songs contributed by John Frusciante, "Crowded" and "Zone". Favorite track: Crowded (feat. John Frusciante).

A Man Lost In Time

HD Download (24bit/96khz) and CD available now. CD format is not available anywhere else except the MoonJune Records website. I will be available via regular distribution only from January 28.
Pre-orders of 180grams vinyl (gatefold) will be shipped in the second half of February 2019.

When an artist takes an unexpected turn into new musical directions, it may cause stirring among fans. This is not the case of the increasingly global fanbase of progressive fusion maestro Dewa Budjana, who always come prepared to the perennial journeys through the world of their favored guitarist. With a list of collaborations that sums up the who is who of contemporary progressive rock and jazz scene (Jack DeJohnette, Peter Erskine, Vinnie Colaiuta, Antonio Sanchez, Chad Wackerman, Gary Husband, Tony Levin, Billy Sheehan, Jimmy Johnson, Jimmy Haslip, Dave Carpenter, Reggie Hamilton, Ben Williams, Joe Locke, Larry Goldings, Janis Siegel, Dwiki Dharmawan, Ron Thal ‘Bumblefoot’, Guthrie Govan, Tim Garland, Bob Mintzer and many others), the Indonesian guitarist is getting his fans used at fearless sound travels.

For his 11th solo recording, Mahandini, he brings his trademark melodic sound imbued of mystic and delicate south-east asian music through even harder edged-progressive flights and raw contemporary rock stirrings. Whether he is moving in the realm of contemporary prog, highly crafted electric jazz or south-east asian traditional music, he never holds any fear that the earth under his feet can turn marshes.

Dewa Budjana has a track of 30 years career as main composer and member of the band Gigi, a best seller and rock icon act in his home country Indonesia, and has released 10 solo recordings that gained him an increasing praise by the progressive jazz critics. International album release of Mahandini comes under the supervision of the visionary MoonJune producer Leonardo Pavkovic, who acted as a mentor for Dewa during his explosion to a wider audience in last decade. The title Mahandini comes from two words, Maha & Nandini: Maha means means big, great and Nandini means ‘the vehicle that carries the God Shiva’ in indian. Using this word as the name for this line-up resulted in a good sign, it sounded like I had a Great Vehicle for my music. I was lucky!

With his unparalleled virtuoso technique, Jordan Rudess is one of the most relevant keyboard icon in the progressive world. Graduated at Juilliard School in classical piano, after collaborating with Dixie Dregs, he joined progressive metal band Dream Theater in 1999. He brought his signature on 16 albums of the band, in addition to multiple solo album, which gave him a top class status in the keyboard world. He is also been very active in pushing the synth technologies to new boundaries, integrating the instrument with new tools, apps and guitar-like interfaces. He has already partnered in extra-Dream Theater adventures with German drummer Marco Minnemann, who is a most in-demand drum instructor and session musician. Mixing an incredible portfolio of techniques on the edge of extreme metal, zappian craziness and prog extravaganzas, Minnemann has released 14 albums at his own name. The indian born Mohini Dey is becoming an usual partner of the drummer and she has gained the highest level of hype for a 22 years old girl. Starting playing bass at the age or 3, she is now a busy scheduled musician, thanks to her impressive virtuoso east-meets-west techniques.

The band shows a powerful balance of technical precision mixed with a delicate sense of playfulness on Mahandini. For the first time Dewa Budjana plays a song composed by a guest musician on his albums: it is the opening Crowded, which has been written by the rock legend John Frusciante. The two became friends earlier than this recording. Deaq Budjana says: "The first time we met it was on 2015, my International manager Leonardo Pavkovic and guitarist and former edktor of Guitar Player Magazine, Barry Cleveland, introduced me to John. He is a great person, every time I went to Los Angeles, he always asked to meet up for dinner and we talked about music. On this album I re-arranged his songs, and he sang on Crowded and Zone." The dramatic piano and guitar opening supports Frusciante’s tense singing until a passionate chorus driven by crunchy guitars bursts in. The band shuffles the cards with clever harmonic modulations into the tasteful prog bridge in the middle of the song.

Queen Kanya might be an honey pot for fans of Steven Wilson’s contemporary prog acts: a bewildering opening arpeggio increasingly builds the tension until a trademark melody of Dewa Budjana takes the stage. The ending duo by Minneman’s drums and Dey’s voice is one of the highlights of the tracks. "Mohini did a konnakol duo with Marco and it is an unbelievable part, it really surprised me!" says Dewa Budjana. The song title comes from the 19th century queen of the Klungkung kingdom in Bali, Dewa Agung Ratu Kanya. Queen Kanya played a key role in the diffusion of poetry and in restoring the beautiful Klungkung palace. Seamlessly moving through the luxurious orchestrations and multiple changes of rhythms, this track is a masterful meeting between western prog and asian melodies, tracking avenues never crossed before.

Balinese atmosferes alternates with tight and intricate guitar and keyboard unisons, while we are uplifted in a world in between by Soimah Pancawati’s haunting voice in Hyang Giri. The Indonesian traditional singer is a star in home country and she performs in TV programs viewed by million of people. Her high pitched voice adds a layer of mystery while the band incessantly explores new boundaries.

"The title Hyang Giri comes from Ring of Fire" -says Dewa Budjana. Those are the mountains surrounding the place we live. Lately we had frequent eruptions in Sumatra, Java, Bali also Lombok or Flores and I called this track after Hyang Giri, whom the God Shiva gives the responsibility to control the mountain.

Fierce arabesques at piano are the perfect opening for the tenuous ballad Jung Oman. Dewa alternates long prolonged guitar notes to well-balanced acoustic solos, showing his impressive capability to keep every melody unexpected even if moving through the boundaries of familiarity. Jordan Rudess, with his deep orchestrations mastery, amplifies delicately this sense of suspended melancholy. No wonder Jung Oman resembles another Dewa’s masterpiece, Ruang Dialisis from Hasta Karma, as both of them were dedicated to the late father. "Jung Oman is the name every family member or close friend called my father with", says Dewa Budjana.

The high-octane riff opening ILW offers the perfect ground for the band going crazy. "The title of this song comes from Indra Lesmana Workshop, the place I learned music a long time ago. This song is dedicated to my guru and teacher, Indra Lesmana, who inspired many musicians in Indonesia. He’s the first Indonesian musician who recorded his album in United States around 1983, with players such as Vinnie Colaiuta, Charlie Haden, Mike Landau. This played an huge influence on me to record in United States with world class musicians." - says Budjana. Mike Stern unleashes a powerful solo, echoed by Dewa’s virtuoso effort. And yet the title track shows the band again at full force with each of the team members offering an highlight personal contribution.

The closure is again on Frusciante’s voice on the mysterious Zone: this time leaving the harshness of the initial track for a surprisingly melodic approach, zigzaging in a manner reminiscent of Jack Bruce and moving unexpectedly over the multiple modulations of the unusually long chorus. The Indonesian guitarist paints aggressive and yet tenuous colors during his solo exploring all the multiple facets of this labyrinth-like song.

Dewa Budjana continues to show how easily cultures meet and reveal nuances we could have never expected before. Whether he’s playing with a masterful musician or another, he never gets concerned: he always knows how to bring out the best of them and reveal something their fans did not expect, but they were secretly looking for.

International release (outside of Indonesia) executive production by Leonardo Pavkovic for MoonJune Music.